In the search of planets beyond our solar system especially habitable world, the biggest opportunities may be found in the cool dwarf stars. Nearly ~75% of our galaxy consists of such stars making them the most common planet host stars. Our nearest neighbour, Proxima Centauri, is one such star with a spectral type M5.5 and hosting an Earth-like planet, Proxima Centauri b, orbiting within its habitable zone. However, the habitability of the planet depends on the high-energy radiation as a result of the chromospheric and coronal activity of the host star. “The high-energy photons like the UV and X-ray photons are absorbed by the planetary atmosphere heating it to 10s of 1000s of Kelvin affecting the capability of the planet to sustain its atmosphere and in particular to sustain water in liquid form” says Dr. Lalitha Sairam (IIA, Bengaluru).

The team member Dr. Christian Schneider (HS, Germany) said “to investigate the fate of this Earth-like planet, a team of scientists from Germany, India, US, Chile, and France coordinated a multi-wavelength observational campaign of Proxima Centauri system”. Both space-based and ground-based observatories joined together to probe the high-energy environment of Proxima Centauri b. On 31 May 2017, three space-based observatories Astrosat, Chandra, Hubble Space Telescope, and a ground-based observatory High Accuracy Radial velocity Planet Searcher (HARPS) participated in this multi-wavelength simultaneous observational campaign. “The Low Energy Transmission Grating Spectrometer (LETGS) onboard Chandra is perfectly suited to measure the coronal properties of stars” added Dr. Peter Predehl (Principal Investigator of this instrument). “For first time Astrosat is part of such a large observing campaign with other space-based observatories like Chandra and Hubble“ says Prof. K. P. Singh (TIFR, Mumbai) who developed the Soft X-ray Telescope aboard AstroSat.

“During the observations, a strong flare was observed by all our space-based participating telescopes” says Dr. Christian Schneider. Proxima Centauri is a well-known flaring star where a large amount energy is released as a result of magnetic reconnection. Stars like Proxima Centauri are known to flare on timescales of few minutes to hours. “The analysis of the observed flare data suggests that the flux increases to several orders of magnitude in both X-rays and UV wavelengths and lasting ~1800s. The energy released during this flare is of the order of ~10^30 erg” says Dr. Lalitha Sairam. “The typical energy released during a solar flare is of the order of 10^26-28 erg. If a flare like the one observed on Proxima Centauri occurs on our Sun this might have a devastating effect on power-grid, interruption of broadcast and electricity, affects the electronic instruments as well as astronauts in space, excess UV radiation in space, additionally also atmospheric display of lights near the poles” says Prof. K.P. Singh. The team is now investigating the characteristics of this flaring event to understand the propagation of such energetic events and effects on the orbiting planetary world. Prof. Jürgen Schmitt (HS, Germany) adds “such powerful and frequent flaring events may produce large radiations and particles which may significantly influence the atmosphere of the Proxima Centauri b and affect its habitability”.

The Chandra program is managed by the NASA’s Marshall Space Flight Center, Alabama (USA). The flight operations and the Chandra Science are controlled by the Smithsonian Astrophysics Observatory in Cambridge, Massachusetts (USA). 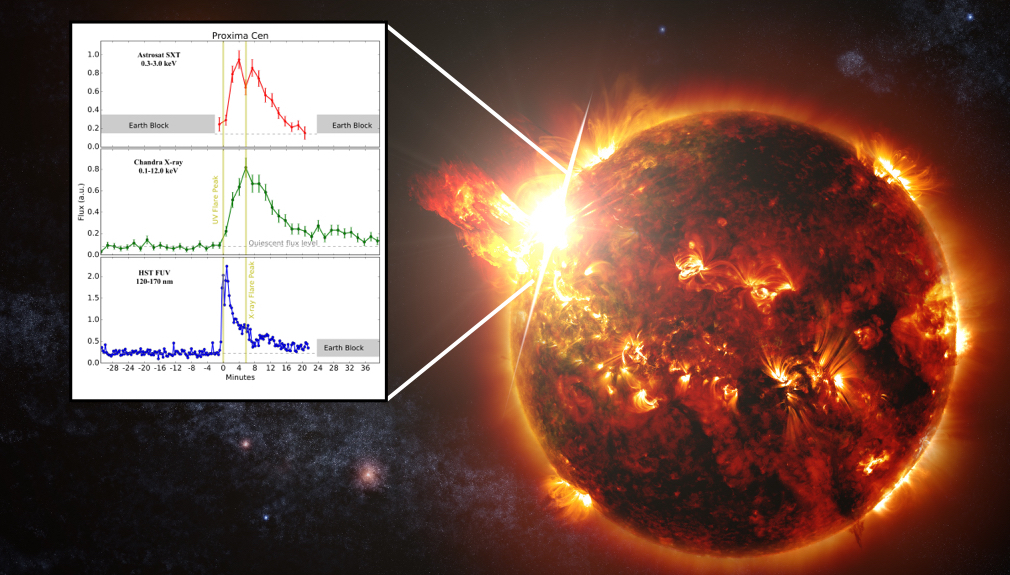 Figure: An artist impression of the flare observed on our nearest exoplanet hosting neighbor-Proxima Centauri (Image Credit: NASA Goddard space flight center). Zoom in shows the light curves of the flare observed by our team on Proxima Centauri with the Astrosat SXT in 0.3-3.0 keV (top panel), Chandra LETG zeroth order in 0.1-12.0 keV (middle panel) and HST FUV in 120-170nm (bottom panel) on 31 May 2017.

7.11.19 A09 Update
Proposers can request monitoring observations with a minimum interval of 3 days between two consecutive observations.

A new version of SXT Response file is available

LAXPC Individual routines software has now been updated to include more features like faint source background estimation, xspec readable rms and lag files, and more. The routines have been made more robust and output more compatible for further analysis (May 19th version) (21 May 2018)

NUV operations restored
On 20 Jan 2018 The UVIT NUV channel reported a BOD (Bright Object Detect) event and entered Standby mode from which it did not recover via normal means. After a concerted effort by the payload and mission teams the NUV channel has been revived and resumed normal operations since 24 February 2018.

AstroSat contributes to the saga of Gravitational Wave Astronomy

LAXPC Individual routines software has now been updated to include more features like Dynamic power spectra and flux resolved spectroscopy (Sept 1 Version).
The routines have been made more robust and output more compatible for further analysis.